Every time I read about the miracle at Cana it brings back a flood of memories from my childhood, along with a very popular song at the time, “He Turned the Water into Wine” by Johnny Cash.  You see, it was “against my religion” to drink, and for the life of me, at the tender age of seven, I could not understand why He (Jesus) would do such a thing, when it was not suppose to be done in the first place, at least not by the rules of my church.  Well…somebody had to be wrong and it couldn’t be my church so…?

Hopefully, this illustration is causing some to laugh and remember how you’ve possibly distorted scripture by placing suppositions, your own interpretations, onto the Word of God.  About twenty years later I began to see I needed to let scripture speak for itself, to not add my cultural distortions.  It is work, but so much is revealed when we take the time to let the Word speak (and now I know I can drink wine – heehee ).

Coming to this week’s reading for our Blogged Bible Study I chose not to be bound by the chapter and verse divisions which can skew the point John is making.  It would be easy to question many parts of this passage from my cultural perspective, but I would rather draw your attention to what John says about the “WHY” of this miracle at Cana.

In the first chapter of John, many titles for Jesus are given:

Yet at the end of the chapter, when Jesus speaks (v.51)

Jesus…said to him, “Truly, truly, I say to you, you will see the heavens opened and the angels of God ascending and descending on the Son of Man.”

He uses the title, “Son of Man.”  This was not an obscure title to the Jews.  In the Prophets, the book of Daniel, this term is given to the One who will have an everlasting dominion, it is a specific prophecy of the coming Messiah.

I kept looking in the night visions, And behold, with the clouds of heaven One like a Son of Man was coming, And He came up to the Ancient of Days and was presented before Him.   And to Him was given dominion, glory and a kingdom, that all the peoples, nations and men of every language might serve Him. His dominion is an everlasting dominion which will not pass away; And His kingdom is one which will not be destroyed.  ~Daniel 7:13-14

Jesus’ disciples had asked Him if He was the Messiah and He answered by saying He is the Son of Man, a title given in the prophecies concerning Messiah, His dominion and His authority.

Three days later we see Jesus and His disciples at a wedding in Cana and the resulting miracle of turning water into wine is performed.  Let’s skip to the end of the story:

When the head steward tasted the water that had been turned to wine, not knowing where it came from (though the servants who had drawn the water knew), he called the bridegroom and said to him, “Everyone serves the good wine first, and then the cheaper wine when the guests are drunk. You have kept the good wine until now!” Jesus did this as the first of his miraculous signs, in Cana of Galilee. In this way he revealed his glory, and his disciples believed in him. (New American Standard)

His glory – primarily signifies an opinion, estimate, and hence, the honor resulting from a good opinion. It is used of the nature and acts of God in self-manifestation,…it was exhibited in the character and acts of Christ in the days of His flesh, Joh. 1:14; Joh. 2:11; at Cana both His grace and His power were manifested, and these constituted His “glory”

and His disciples believed in Him – to believe,” also “to be persuaded of,” and hence, “to place confidence in, to trust,” signifies, in this sense of the word, reliance upon, not mere credence…”to believe,” also means “to entrust”

Wow.  This speaks volumes.  Why water into wine?  Not for His mother…not for a wedding…not for little things in our lives…not to teach me I can drink wine…Why did He do this?

To lay bare His grace and His power to His disciples.  To give His disciples the correct estimate of who He is, the Son of Man.  He manifested Himself as Creator, as God.  And what was their response?

They entrusted themselves to Him, they were persuaded and placed their confidence in Him…they believed.

God reveals Himself to whomever He wishes.  At the time He determines, He manifests Himself to us and we are to be persuaded, to put our confidence in and to trust Him…to believe.

It reminds me of the verse in Galatians about Paul’s conversion experience.  He had been a persecutor of the people of the Way…But when God, who had set me apart even from my mother’s womb and called me through His grace, was pleased to reveal His Son in me so that I might preach Him among the Gentiles…

It is at God’s pleasure that He does the revealing, in His time. Then we are given the chance to entrust ourselves to Him…to believe.

I AM the True Light 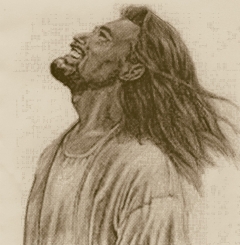 God grant me the serenity
To accept the things
I cannot change;
Courage to change the things I can;
And wisdom to know the difference.

Living one day at a time;
Enjoying one moment at a time;
Accepting hardship
As the pathway to peace;
Taking, as Jesus did,
This sinful world as it is,
Not as I would have it;
Trusting that He will make
All things right if
I surrender to His will;
So that I may be
Reasonably happy in this life and
Supremely happy with Him
Forever in the next.
Amen.